A band of orcs attacks a roadside inn along the main road through the wilderness. Only the PCs stand between the orcs and the utter destruction of the inn and everyone trapped within it.

"Inn Peril" is an introductory Dungeons & Dragons Fourth Edition adventure written by Matt Forbeck, with illustrations by Jeff Preston and Tom Martin. Designed for five 1st-level characters, it can be placed in any isolated region in any fantasy game world. 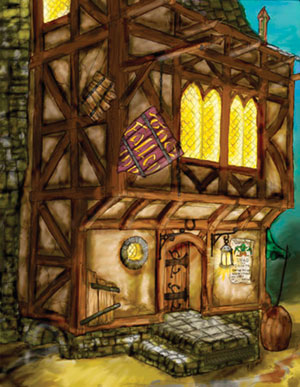 The Fallen Inn sits alongside the main road leading through the local kingdom, about a full day's ride from the nearest town. Nestled alongside a creek that burbles through the gentle hills that surround it, the inn provides travelers with a roof, a meal, and a dry bed at the end of a long day on the road.

Unfortunately, the Fallen Inn has fallen on hard times. Goblin bandits plaguing the road have driven off much of their business, and the few travelers and merchants that pass through the area tend to keep to their well-guarded caravans rather than spend the night in a strange inn.

Doron and Baria Hillsby—the husband and wife who serve as the inn's keepers—grew more desperate about their situation every day. Without enough customers to help support themselves and their three young children, they turned to watering their wine and engaging in petty larceny with their guests' belongings.

Then, one day, a blind, white-bearded dwarf named Stazak staggered into the inn with a deal for the Hillsbys. If they would but let him stay in their place and sell maps to the adventurers who sometimes stopped through, he would give them half of the proceeds of each sale.

Doron wanted to kick the old dwarf out, but Baria stayed his hand. With nothing to lose

but a thin bit of broth and the use of a long-empty bed, the Hillsbys gave Stazak a week. On the last day, Stazak sold a map to a party of adventurers for a tidy sum, and he and the Hillsbys were in business.

What Stazak hasn't told the Hillsbys is that the maps all lead to the same place: a copse of trees in a nearby hollow. When aspiring adventurers reach this place, they find no dungeon and no treasure waiting for them—just a goblin ambush.

After Stazak sells each map, he excuses himself so he can grab some air. Once outside, he hands a note to a goblin runner to take to Krysh, the bandits' leader, telling him to get his next ambush ready. Krysh then gathers enough of his goblins for the battle that they can destroy the adventurers with overwhelming numbers.

The heroes stop at a roadside inn on their way from one part of the world to another. While there, a blind, old dwarf (Stazak) beckons them to his table and sells them a map to what he claims is the entrance of a hidden dungeon packed full of barely guarded treasure.

Unfortunately, Doron has gotten greedy. He's drugged Stazak's drink so that he can rob him of the money the heroes just gave him. This means that Stazak misses his meeting with the goblin runner, leaving Krysh unaware that the heroes are on their way.

When the heroes reach the spot on the map, they surprise a small band of goblins lolling about there. There is no dungeon. The goblins live in a nearby bandits' lair, and they hire unscrupulous humans to wander the area and send eager new victims their way.

Once the heroes defeat the goblins, they find nothing on the bodies but several other copies of the map.

The heroes return to the inn to confront Stazak. When they arrive, though, they discover Krysh and his goblins tearing the place apart. Krysh takes the Hillsbys and their children hostage and urges the heroes to move on, as this affair doesn't involve them.

Click here to view the entire adventure in PDF format!