Eric Steiger (ES): In 15 years, you’ve managed to take Dork Tower from its humble beginnings as a single page in SHADIS magazine all the way to… a single page in Game Trade Magazine. Seriously, though, after 15 years of a regular comic book, multiple translations, and merchandising spinoffs, the webcomic, and nine trade paperbacks, what element of Dork Tower’s success are you most proud of? • John Kovalic (JK): Creating characters that people care about. As I gear up to do more comic books and collections, I'm still amazed by how invested readers are in the lives of the Dork Tower gang. It's a wonderful feeling I hope never to take for granted. I first noticed the passion right after I introduced Gilly, the Perky Goth. She was only really supposed to be around for that one ten-page story. But readers wanted more.

ES: When you stopped the comic book, Gilly was at grad school in England with Matt pining for her back in the States. Are there any plans to finish that storyline, and if so, when and in what format?

• JK: Absolutely. That storyline is being finished as we speak. More than that, I can't really say, save to hint strongly that more comic books are in the future.

ES: You’ve said repeatedly that your chief influence as an artist has been Charles Schultz. What about influences as a writer/comedian?

• JK: Oooo… too many to mention. I've several friends who are accomplished stand-up comics - folks who can think quickly and brilliantly on their feet - and that always amazes the heck out of me. Growing up in England, the Goon Show was an early, major influence, and from there, Monty Python, and from there, The Young Ones and Blackadder, etc., etc. At the moment, I'm heavily into Phineas and Ferb, as is my three-year old daughter.

ES: If you were pointing a new reader at a place to get started on Dork Tower, which

trade paperback should they begin with?

• JK: Definitely "Dork Covenant." That's where it all began, and it's still the bestselling collection. Now in its fifth printing - call your Friendly Local Game Store! Operators are standing by! After that, Dork Decade is a good place to start - that collects all the Shadis and Dragon Magazine strips in full color, and probably marks the high point of my publishing career so far. I had a lot of fun doing the directors cut "commentary" at the end.

ES: Looking back, is there anything you wish you’d done differently when you first started the comic?

• JK: I wish I'd known what I was getting into! Seriously, Dork Tower was started as a bit of a lark when Shadis approached me about doing a comic strip about gamers. I had no idea it would become what it would. I was very lucky: there are so many comics and webcomics about gamers these days, if I were starting it now, I'd have no idea how to begin!

ES: Obviously, the Out of the Box (OotB) game for which you’re most well-known is Apples to Apples, but which is your favorite to play? • JK: That changes on a regular basis, but at the moment, I'm absolutely loving FAUX*cabulary, a game about building words to match hilarious definitions. I don't think I've enjoyed any game we've put out this much since Apples to Apples itself. I actually have two sets, so I can play with double the number of word cubes. The game is easy to learn and plays fast and furiously - the hallmark of the great Out of the Box games. There's no better feeling in the gaming business than releasing a game you truly love, and FAUX*cabulary is a great one.

ES: Your daughter is approaching the point of being ready to start playing games. Are there any OotB games you’re particularly excited about teaching/playing with her?

• JK: She's already started playing Bug Out! - without me. Bug Out! is an easy matching game with a twist, but younger kids really seem to love the bug drawings. My daughter just turned three, so she's only just beginning to get the concept of board and card games. It's a marvelous time at home!

ES: Is there anything coming soon from OotB that you’re particularly excited about?

ES: What one item from Munchkin do you most wish you had in real life? Please don’t say

• JK: "Kneepads of..." Oh. Wait. Darn. OK. Second place would have to go to the "Wishing Ring", as it's so darned useful. I could wish away deadlines! Beyond that, there's a rather lovely item called "Maul of the Titans" that I drew for the upcoming Munchkin Conan core game. I'd love one of those, simply because (a) It looks lethal, and (b) I had a ton of fun with the drawing. I'm biased towards any card that has a drawing I'm particularly happy with on it. Working on Munchkin Conan was hugely enjoyable in part because I got to make up lots of lovely, intricate Robert E. Howard-esque weapons.

ES: 10 years of drawing Munchkin, what’s been the biggest challenge?

• JK: Remembering cards I've drawn before. Munchkin is still every bit as fun as it was when Steve Jackson first asked me onboard. In a way, it's even more fun, now, as I remember that very first game being under a huge time-crunch. But after 3,500 cards, there are some cards I just don't recall at all. I'll look at a card from, say, Munchkin Bites or Munchkin Impossible and say to myself, "I drew that? REALLY?"

ES: A lot of the appeal of Munchkin is that every one of us can identify to some extent as a power-gaming, rule-bending, fight-to-the-death dungeon-crawling, munchkin. What parts of Munchkin resonate with you?

• JK: Since Igor, from Dork Tower, is based directly on my friend Scott, from my old gaming group,  my roleplaying sessions are often chaotic and random. So Munchkin hits VERY close to home for me. But what resonates most, to me, us getting killed by your own party. No, really. I always get ganged up on whenever I play the game. Other players assume that I know some secret strategy, just because I draw the darned cards, and I get beaten upon early and often.

ES: What hints can you give us about the next 10 years of Munchkin?

• JK: The big news at the moment is that Munchkin Apocalypse was announced at Hal-Con: http://www.worldofmunchkin.com/apocalypse/ I can't wait to get started on that. Beyond that, I can't give any hints, or the secret masters at Steve Jackson Games will have me [ANSWER REDACTED. FNORD]. But there's some incredibly fun stuff on the near horizon that I can't wait to get to. Things like [FNORD], [FNORD] and [FNORD]. But perhaps I've said too much already. Seriously, Munchkin just keeps getting bigger and better. There's some amazing stuff coming up.

ES: Roleplaying gaming has made a lot of progress in recent years towards being a 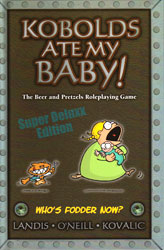 serious, story-oriented dramatic medium… and Kobolds Ate My Baby (KamB) has worked tirelessly to undo almost all of that. What’s your favorite KamB story?

• JK: Best thing about Kobolds Ate My Baby is simply being able to hang with Chris and Dan - amazing guys, and super-creative. My second-favorite thing is the actual character designs of the Kobolds for the Super Deluxxe Edition. And there's more Kobolds goodness coming, at last. Chris and Dan have moved into high-gear, and I can't wait. ALL HAIL KING TORG!

ES: I loved Snapdragons and Dr. Blink. Any chance of seeing new material for either of them?

• JK: Yes, definitely. In fact, you can follow Dr. Blink's Twitter feed at @DrBlinkShrink, for daily doses of dubious super-advice. But beyond that, much more is coming.

ES: Any other collaborations or upcoming projects that we should be keeping an eye out for?

• JK: The most important collaboration for me recently has been Monica Valentinelli coming onboard as my Business Manager. That's pretty much doubled my productivity, and helped get me more organized than I've ever been. After that, I'm excited about a new game I've created, called ROFL!, which should be out in 2012. And there will be some big news with a couple of big-name collaborators on Series II of the Mythos Buddies (Dreamlands Toyworks) line. But of course, the really big thing for me this year is the 15th Anniversary of Dork Tower - gearing up for new comic books, a spiffy, snazzy new website, lots of new things. It's all very exciting. I'm amazed at how lucky I am, to be able to do things like this for a living.